Reliving the 2002 Playoffs: The Emergence of a Superstar 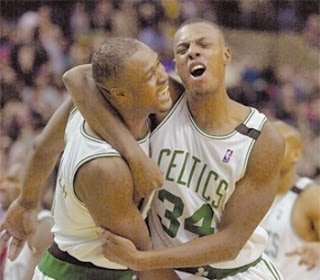 In the the early 2000's in the NBA, it was no secret that the West was clearly the more dominant conference. Shaq and Kobe in LA, Duncan and Robinson in San Antonio, along with extremely talented teams in Portland, Sacramento, and Houston, it was clear that the NBA Champion was coming from that side of the country.

The East, however, was a different story. Other than Allen Iverson's 76ers coming off a trip to the NBA Finals, there were a ton of question marks about what team would step up to be the class of the East.

New Jersey, Philly, Milwaukee, Detroit, Indiana and even Toronto were all contenders to make it to the Finals. The Celtics would make the leap to join that bungled mess of Eastern Conference Contenders in the 2001-02 season on the back of their budding superstar, Paul Pierce.

Pierce had one of the best statistical seasons of his entire career in the 2001-02 season. He averaged 26.1 PPG and was an All Star for the first time of his young career. Under first year full time head coach Jim O'Brien, Pierce and the Celtics were able to find the success that had eluded them since the early nineties. It was a strange thing to see the Celtics actually winning and contending for a playoff spot. 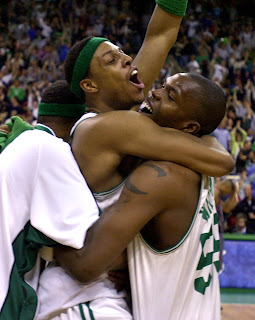 Pierce, Antoine Walker, Tony Battie, Eric Williams, Kenny Anderson, and the mid season acquisitions of Tony Delk and Rodney Rogers would be the backbone of the Celtics that year. They reached the playoffs with a record of 49-33. It was a 13 game improvement over the prior season, and would be a launching pad for Pierce to cement his legacy as an all time Celtic.

The Playoffs were a new horizon for Pierce who showed early his yearning for the big stage. In the first round of the playoffs the Celtics drew Allen Iverson and the defending Eastern Conference Champions, the Philadelphia 76ers. The Celtics would take the first two games at home and looked to be cruising to their first series victory since Larry Bird had retired.

Yet the Sixers would not be laying down easy, they fought back to tie it at 2, and a decisive game 5 back at the Fleet Center. This would be "The Truth's" first taste of an elimination - do or die -win or go home- scenario.

Pierce quickly showed to the Celtics and to the NBA why he would turn into one of the most feared clutch performers in the NBA. In the first half, Pierce scored 29 points on his way to a 46 point night. He set the tone early getting to the basket at ease and knocking down 8-10 from down town.

The first half was a duel between the teams two superstars, Pierce and the reigning MVP Allen Iverson. Pierce took the upper hand and out scored AI 29-20 in the first half. The Celtics never looked back and took the decisive game five to win the series.

This was the first playoff series for the 24 year old Pierce. He averaged 29.1 PPG in the 5 game series. Put up against his notable counterparts of his generation Pierce blows the competition out of the water.


Pierce, a model of consistency in that series showed that he would not wilt on the big stage. His 29.1 PPG included a clutch go ahead three in Game 1, and the aforementioned 46-point performance in a decisive Game 5 where he put his teammates on his back. Not a bad showing for the Truths playoff debut.


Next up were the very underrated Detroit Pistons. Pierce and Walker in the first round were proving to be a legitimate 1-2 punch in the playoffs but that would be tested in a 7-game series against a team that was known for its stifling defense.


After getting bludgeoned by a barrage of 3-pointers from the Pistons in Game 1, the C's were looking at a 0-1 deficit.  Heading into game 2 at the Palace in Auburn Hills many thought it would be the Pierce and Walker show bouncing back from the tough loss two nights prior.


Game 2 was a well rounded team effort that Pierce was extremely proud of. He led the way with 22 points of his own, but Eric Williams and Rodney Rogers would chip in a combined 31 points between the two.

Based on that performance it was evident this team had the mindset that it could make a deep run. Even though they never scored over 90 points in any game the whole series, Pierce and the C's would take the next three games and dispose of the Pistons in 5 games. The Celtics were back in the Eastern Conference Finals since 1988.

Even though the Celtics had advanced the the Eastern Finals, the critics were still out to say they had no chance. Pierce was still considered a B-class star in the league with a lot of holes in his game. Pundits gave the Celtics no chance to knock off the top seeded Nets to get back to the NBA Finals, and many predicted sweep.

The Nets took the first game rather easily. Behind a triple double from their leader Jason Kidd and seven players scoring double figures, they showed why they were the best team in the conference in the regular season. Pierce and Walker both had 27 points a piece and kept it close but it would not be enough on that night. 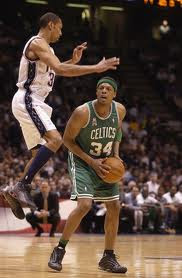 In game 2 the Celtics were able to steal one from the Nets home court and set the table for what would be the greatest game the Fleet Center would ever hold.
It was a game were you'll always remember where you were when you saw it.

The Celtics came out to start the game about as flat as a team can. They were down double digits the entire game. Going into the 4th quarter the Celtics were looking at a 21 point deficit.

Pierce in his own right was playing awful. He managed only 9 points through the first 3 quarters. It seemed like nothing could go right for Pierce who hadn't experienced a scoring drought like this the entire postseason.

With 1:37 left in the third quarter Pierce, visibly frustrated, got into it with Jason Kidd, resulting in a double technical foul. At that point in the game the C's were 25 points down and looked to be dead men walking. Yet it seemed to spark something in the young Celtic Superstar.  The fire was starting in Pierce's mind but the gasoline was about to be poured all over by an unlikely teammate.

Antoine Walker in between the third and fourth quarter left us with what would go down as the lasting impression from the game. He was shown emotionally yelling at Pierce in the huddle to get him out of the funk. The fire that was sparked from the double techs, was now a massive out of control wild fire, and the Nets would be his victim.

Including the end of the third, the Celtics, led by 7 points from Pierce himself, bolted to a 13-0 run, and shockingly had the lead down to 10. They didn't look back, from there.

It seemed like everything Pierce would do was money. On the offensive end, he couldn't miss. On the defensive end, he was drawing charges, making steals, and getting key rebounds.

Antoine Walker ignited the C's with his inter-quarter speech, but Pierce delivered on the court and had 19 points in all in the last quarter of play. Also it led to this....

In breathtaking, unbelievable, legendary fashion, the Celtics pulled off the biggest 4th quarter comeback in NBA Playoff History. That was it, Pierce had arrived on the National stage as NBA superstar.

Not to take anything away from that incredible comeback, but the Nets came back to win the next three and take the series in 6. It really didn't matter though, the Celtics and Paul Pierce had arrived.

They were no longer the laughing stock of the East, and bottom dweller in the Atlantic. Pierce made this team a force to be reckon with and a legit playoff contender for years to come.

People remember the 2002 playoffs for a lot of reasons. The Shaq and Kobe dominance, the Tim Donahue scandal, among other things, but here in Boston it will be known as, the birth of Paul Pierce..."A Celtics Legend."


Pictures used via: Getty Images
Video used via: YouTube
Posted by SeanDutra at 8:14 AM