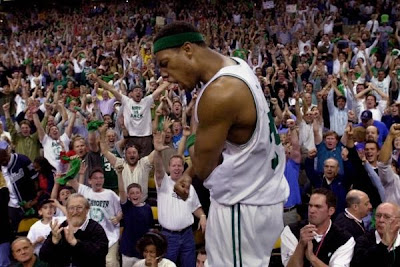 In 2002, Paul Pierce and the Celtics were two wins away from making the NBA Finals. It took the Celtics six years to make it to the NBA Finals after its deep run in 2002, making it that much sweeter for captain Pierce who stuck with his team through the tough times and never left. He never even talked about leaving.


Before Pierce got help from future hall-of-famers Kevin Garnett and Ray Allen, he was overlooked as one of the best players in the NBA. 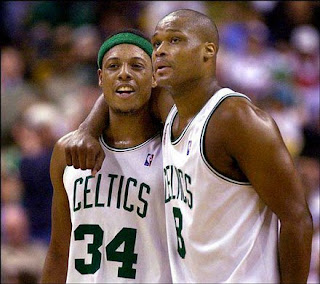 The 2001-2002 campaign was Pierce's first All-Star season and he carried the Celtics to the Eastern Conference Finals with a team that consisted of Walker and a group of role players.

Celtics were two wins away from a date with the champion Lakers in the NBA Finals but fell short to the Nets.

Celtics made it out of the first round only once after the '02 season. And even though Pierce was at the beginning of his prime, he never asked the Celtics to trade him so that he could play on a contending team.


Boston's sports media didn't make it easy for Paul either. He was criticized for not being a leader, an immature player who the Celtics were better off without. Still throughout the criticism, he never signed with another team or asked for a trade.

He stayed loyal to his team.

They don't make them like Pierce anymore. A pure scorer in every way possible and an underrated defender (finished top ten in steals for most of his career) who was a perennial all-star and stayed on the same team throughout his entire career. Who's a better example than Pierce?

Kobe won his rings but got plenty of help from one of the best centers of all-time. Even though the rings from the post-Shaq era are impressive, how many times did he demand a trade throughout his career? We lost count. He even stopped playing in 2008, clinging onto an injury before the Lakers traded for Pau Gasol.

LeBron James, a player who will be considered one of the greatest NBA players to ever play when he retires jumped ship before the going got tough in Cleveland. Before James ran south looking for help to beat the big bad Eastern Conference champion 2010 Celtics, he made an appearance in the 2007 NBA Finals at age 22.

James, who grew up just outside of Cleveland put up very impressive numbers in 2007 and led his team to the Finals in his fourth season. James' 2006-07 numbers were very similar to Pierce's 2001-02.

If you compare the 2001-02 Celtics to the 2006-07 Cavaliers, both teams nearly finished it's season with matching records. 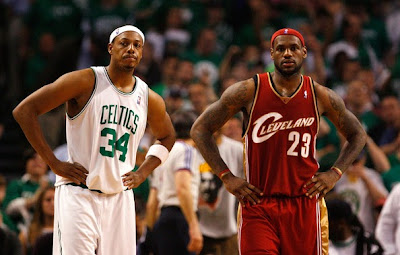 Although James carried his team further than Pierce did in 2002, if you compare their stats, they're nearly identical.

The Truth was one of the best players in the league in the 2001-2002 season but his hard work was never acknowledged on the national stage or by the NBA for that matter. At the conclusion of the 2001-02 campaign Pierce wasn't even named to the All NBA First Team. Heck, Pierce didn't even make the All NBA Second Team! The NBA threw him a bone (probably because of the game three comeback in the ECF, he got everyone's attention after that) and Pierce made the All-NBA Third Team. 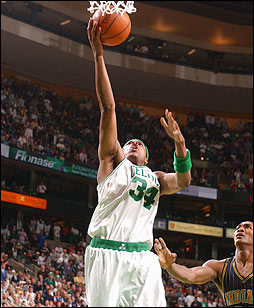 Of course the hype around James was much different compared to Pierce's entrance into the league but it's worth noticing that Pierce had the least success with the Celtics than James did with the Cavs, and yet still stayed loyal to green and white.

Pierce overachieved again the following season (2002-03) with a much weaker group. Pierce tried to bring the Celtics back to the Eastern Conference Finals with J.R. Bremer as his point guard.

Yes, I'm serious he was the starting point guard that season and the Celtics still knocked off the Indiana Pacers in the first round. A team that started Reggie Miller, Ron Artest, Brad Miller, Al Harrington and Jermaine O'Neal (in his prime).

There hasn't been a lot of other scorers in the NBA that have carried their team by leading in almost every statistical category. In Pierce's prime (2001-2008), Kevin Garnett is the only other player that comes to mind of someone who stayed with the same team and carried his teammates statistically.

In the 2003-04 season, Garnett had the best season of his career and earned himself the MVP award. 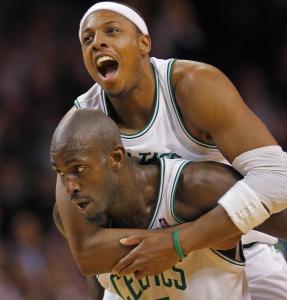 He led his team in every single statistical category (even assists). However, Garnett and the Timberwolves struggled to make it out of the first round and made an appearance in the Western Conference Finals only once when they loss to the Lakers that same year.

Now a days, it's hard to find perennial all-stars who are committed to sticking with a struggling team. It took Garnett over a decade to move on before teaming up with Pierce in Boston. And out of those 10 plus years in Minnesota, Garnett only made it to the Western Conference once.

Pierce can almost say the same. In his first nine years, Pierce endured five seasons of not making the playoffs, three seasons of first and second round exits and one semi successful run in 2002.

Could you imagine if Pierce and Garnett had the same kind of success as LeBron James had in his first seven seasons in the league? Garnett probably would have never given up on Minnesota. And Pierce may have never gotten the help he needed to win a title in 2008.

We're fortunate to see a player like Pierce. He is a true Celtic who will be missed by the die hard Celtics fans in Boston. Although he didn't get enough praise from the league and people around the NBA, it made the great moments he gave us that more special.

He was a leader, face of the franchise, and the ultimate underdog of the league. But more importantly; he was ours.