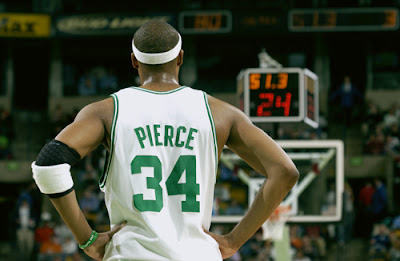 Less than two months before the 2000-2001 season, Pierce was lying in a hospital bed fighting for his life. Not only did Pierce make it out of the hospital alive but he was on the court for the season opener against the Detroit Pistons.

Pierce was stabbed 11 times at a night club in Boston. He was in an altercation and was rushed to the hospital moments after.

Although his numbers from this game 13 years ago won't raise your eyebrows, it was a special night for Pierce and the city of Boston because of his determination to return to the court. Against doctors orders, Pierce put on a memorable performance in a season opening blowout.


In a Sunday afternoon thriller against the Miami Heat, the Celtics pulled out the win in double overtime without their starting point guard and found out after the game that Rondo tore his ACL and would miss the rest of the season.

Paul Pierce and the Celtics responded to the loss of Rondo with a seven-game winning streak, topped off with a triple-overtime classic against the Denver Nuggets. Pierce played the point-forward and gave us the best triple-double of his career.

He sent the game into triple-overtime with a buzzer-beating 3-pointer and closed the door on the Nuggets in the third overtime. Pierce put together two more triple-doubles in what turned out to be his last season with the Celtics.

After scoring only five points in the first half, Pierce gave it to Ron Artest and the Pacers by scoring 32 points in 24 minutes.

Celtics tied the series 2-2, and went on to win it to upset the Pacers in their best-of-7 series.

Paul Pierce has never been one to shy away from taking shots, even if he missed 15 of them in the first half. After coach O'Brien was ejected early in the third quarter for arguing over a foul, Pierce scored 46 of his 48 points in the second half and overtime to lead the Celtics to victory. He was perfect from behind the arc and went 17 of 18 from the free throw line.


"You feel like heads and shoulders above everybody," Pierce said about his second half. "You feel like everybody else is moving in slow motion and you're the fastest guy out there. No matter what you do, you feel it's going to work."

In a season that turned out to be Pierce's career-high in points per game (26.8) and total points scored (2,166), he reached his career high against none other than LeBron James.

It was the LeBron vs Pierce show at TD Garden from tip-off until the end of double overtime. In a game when Celtics were behind all game, Pierce carried his team to double-overtime and scored a career-high 50 points. LeBron James scored 43 points to go with his 12 rebounds and 11 assists for the triple-double before eventually topping Boston, 113-109. Pierce scored 31 points after the first half and became the first Celtic to score 50 points since Larry Bird (1989).

"I really got into a groove in the second half," Pierce said. "Guys were getting the ball to me. It felt good to me. You know, it would have felt a lot better if we would have been on the other side, but it was just a great game to be a part [of]"

In the early 2000's there was no duo more dominant than Shaq & Kobe.

Lakers won three straight championships. However, in 2001 the Celtics stopped in L.A. and gave the Lakers a run for their money.

Paul Pierce kept his team close and put on a performance that made a lasting impression on one of the greatest NBA centers of all-time, annointing a nickname that followed for the rest of his career.

It was the moment that Pierce and every young 20-something year-old Celtics fan that followed him throughout were waiting for; the NBA Finals.

After 22 years, the Celtics were back on the big stage. But in the second half, Pierce worried Celtics fans when he went down and was brought back to the locker room in a wheelchair.

He returned to the court late in the third quarter, limping from the locker room. Pierce hit two big back-to-back three pointers to give the Celtics a four-point lead. Although he only scored 22 points, it was his resiliency that made Game 1 such a memorable performance.

Any Celtics fan in their 20's or older can tell you about the greatest comeback in NBA playoffs history, and no matter how many times they've talked about it, their faces still light up 11 years later, if you ask them right now.

Celtics were down by 25 points late in the third quarter and didn't have anything going until the fourth quarter started. Antoine Walker gave a speech to his teammates but especially to Pierce, saying that the game wasn't over and that they were going to comeback.

Celtics outscored the Nets 41-16 in the fourth quarter, led by Pierce's 19 points. It was a historic night and another career defining performance for Paul, who did it in his first Eastern Conference finals.

The 76ers forced a series deciding game five after being down 2-0 and set the stage at the FleetCenter for one of Pierce's biggest scoring nights of his career. Pierce lit up the 76ers, hitting a flurry of three's and wearing the signature "I'm in my zone" Pierce look that wouldn't come off until the Celtics opened up a 30 plus lead.

Pierce left Iverson to only talk about "practice" in his post game press conference.

Game 7 of the Eastern Conference Semifinals was an instant classic; a dual between Paul Pierce and LeBron James that was one of the greatest in NBA playoff history.

Pierce scored from start to finish and in every way possible. He took it to the hoop, he made a handful of three's, got himself to the free throw line and shot close to 60 percent from the field for 41 points.

The most memorable moment of the game came late in the fourth during a jump ball when Pierce dove to the floor, battled for possession between James and another Cavalier and sealed the game with two made free throws. There wasn't another player on the floor that wanted it more than Pierce.

Even though the win wasn't a ticket to the finals, it was clear that the Celtics beat its toughest opponent in the East and that they could smell the NBA finals more than ever.

Pierce led his teammates to an NBA title and cemented his legacy as one of the greatest Celtic to ever wear green and white.