Pierce believes Rondo can lead Celtics into next Era 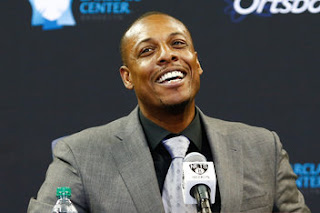 Rajon Rondo's season ending ACL injury was the beginning of the end. Celtics struggled without its point guard in the playoffs, and lost in the first round of the to the New York Knicks. The offense struggled and it was evident that the team missed Rondo.

Then, it all came down. Doc Rivers headed out to Los Angeles to coach the Clippers. Paul Pierce, Kevin Garnett and Jason Terry were traded to the Brooklyn Nets, ultimately leaving Rondo as the lone all-star in Boston.

Many have questioned Rondo's leadership in the past. There have been rumors that he had problems with Rivers and ex-teammate Ray Allen. Some reports say that the problems nearly escalated to a physical altercation in both instances and that Rivers wasn't excited about rebuilding around Rondo.

While many consider Rondo to be a headcase, his ex-teammate Paul Pierce says Rondo is up for the task of leading the Celtics into the next era. He recently told the Boston Globe that he has no doubts in Rondo and thinks he will surprise his critics.


"Without question [Rondo can be the man in Boston]," Pierce said. "I've already talked to Rajon; Rojon's mature. People talk about the relationship he had with Doc [Rivers], and they probably had their best years over the last two years. So I don't think that was a reason for Doc leaving. I've heard that, but that wasn't a reason for Doc not coming back" [Boston Globe]

It wouldn't mean much for Pierce to say these comment if he were still in Boston. As the captain you're suppose to defend your teammates, but he's a Net now and is still defending Rondo. Pierce not only cosigned his former point guard, he added some praise. 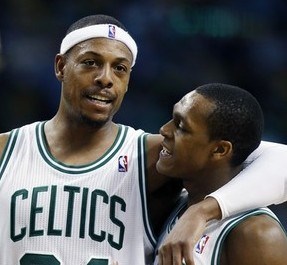 "Rondo is one of the best players in the league," Pierce said. "He's a guy who can be the face of a franchise. He's won a championship, he's been an All-Star. There's a lot of organizations who don't even have a face of that caliber. I definitely think the's matured and can handle a lot. I talked to him and he's ready for the challenge. He knows that it's his team. He knows he has to be a leader, and from being around me and Kevin [Garnett] and seeing how we work" [Boston Globe]


"Rondo's got to understand he's got to put responsibility on some of the other guys," Pierce said. "Maybe like a Brandon Bass or some of the older players. It's hard when it comes from just one guy. There's got to be other guys who command respect on the team, that help out with that role" [Boston Globe]

Although these comments from Pierce breathes a little hope for Boston's only point guard, the bigger question may be how will he return from his ACL injury.

No one knows for sure if Rondo will be himself when he returns to the floor. In the past there have been athletes that come back from an ACL injury but few return at a high caliber. Celtics hope its point guard will be the triple-double machine he was when he was healthy. And if he does make a great comeback, and becomes a great leader we will remember who told us so.