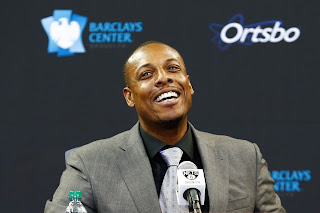 When the Brooklyn Nets come into town to face the Celtics, one of its newest members of the squad will not be suiting up to play his former team.

Future hall-of-famer Paul Pierce told ESPN NY Radio that he will skip the preseason showdown at TD Garden and will only suit up in Boston during the regular season.

Not sure if Pierce noticed when he looked at the schedule but um, he's slated to come to Boston two times next season, once on Jan. 26 and again on Mar. 7.


"You just want to get (the emotions) out of the way. When you gotta go through something tough, I've always been a guy that just wants to get it out of the way. It's gonna be in the back of my mind," Pierce said.

Moving on from Boston, Pierce also talked about the Knicks and his dislike towards them. He also went on to say that, get ready Celtics fans, he said this Brooklyn team's the most talented he's ever played for.


"What team in the NBA can say they can put a starting five out there with all the guys have been all-stars?" Pierce said. "That's tough. It's definitely the most talented team, but come the end of the year -- June, July -- when I'm out there on the beach, I want to say this is the best team I've ever played on, and the only way we can do that is to win a championship."