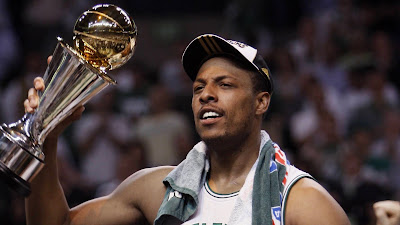 The Naismith Memorial Basketball Hall of Fame has nominated Celtics legend Paul Pierce for the class of 2021.
This puts Pierce one step closer to Springfield, MA as an official inductee into the Hall of Fame, following a list of eligible candidates was announced on Tuesday afternoon. "The Truth," who retired in 2017, is more than likely to become a first ballot finalist after 19 seasons in the NBA.

One of the best parts of my job each year is getting to tell former players they've been nominated to the @HoopHall - but the absolute best is when it's one of our own. CONGRATULATIONS @PaulPierce34, what a fun moment today. Couldn't be more deserved. pic.twitter.com/v25rc8Ml1X


While the enshrinement ceremony is scheduled for next September at the Hall of Fame, the finalists for the 2021 Hall of Fame class are expected to be revealed come March and the final class is expected to be announced in April.
Pierce is in the first year of his eligibility and will be joined by fellow nominees Chauncey Billups, Chris Bosh, Michael Cooper, Shawn Marion, Ben Wallace and Chris Webber.
Pierce's résumé includes being a 10-time All-Star, four All-NBA team selections, 1998-99 All-Rookie team and an NBA Finals MVP when he won his only championship with the 2007-08 Celtics.
He finished with career averages of 19.7 points, 5.6 rebounds and 3.5 assists, while shooting 44.5 percent from the floor and 36.8 percent from 3-point range. Pierce averaged 20 or more points per game in eight seasons, including a career-high 26.8 during the 2005-06 campaign.
After 15 years in Boston, his 22,591 points scored as a Celtic are the second-most in franchise history behind John Havlicek. Pierce's No. 34 was raised to the TD Garden rafters in 2018, becoming the 23rd Celtics player to have their jersey retired.
Being one of the more clutch closers in the modern era, Pierce had epic playoff battles with LeBron James and Kobe Bryant, among others during his nearly two-decade career.
Though he played his final four seasons with the Brooklyn Nets, Washington Wizards and Los Angeles Clippers, Pierce will always be remembered as one of the best all-time to ever come through Boston.