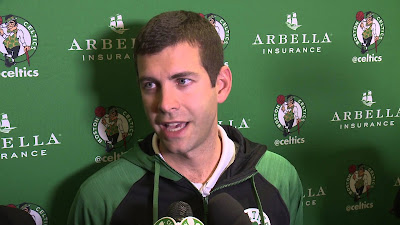 Starting Lineup: "It'll be the same as Italy,"

Expect Rozier to play big minutes tonight. Much like Monday night's game against Brooklyn, coach Stevens plans to give him as much minutes as he can. Because Rozier missed a week, it is very important that he plays a lot of minutes in these final two preseason games.

"He was way out of our reach [on the draft board] so I didn't spend a lot of time with him. I watched a couple of preseason games he's played, an in summer league. I think he's a high-ceiling guy. I think he can be a really good player, there's no question about it. He was picked fourth [in the draft] for a reason, I think he's a great fit for how they play."

When asked if the Celtics sang Happy Birthday to him, Stevens replied: "No." Coach joked that he has heard the guys sing before and figured he was probably better off not hearing his team serenade him before their game against New York.
Posted by Josue Pavon at 6:31 PM
Email ThisBlogThis!Share to TwitterShare to FacebookShare to Pinterest
Labels: boston celtics, BRad stevens, causeway street blog, josue pavon, nba, new york knicks