New York - On a last-minute lineup change by Brad Stevens, the Celtics came out of the locker room with a different attitude than their previous three-games. After a 14-2 run to start the first quarter, Boston never looked back as they grabbed a 108-97 win in Madison Square Garden on Tuesday night.

Marcus Smart, who was inserted as the starting point guard, finished with 13 points, 4 assists, 4 rebounds and 2 steals. The shake up also allowed Jae Crowder to come off the bench (13 points, 4 rebounds in 29 minutes), while Evan Turner played the three and gave the C's a better flowing offense to begin the game.

"We came with the energy right out the gate," Smart said. "That's what we've been lacking."

Avery Bradley scored a game-high 26 points on 11-of-14 shooting (including going 3-of-5 from deep). Jared Sullinger added with 22 points on 11-of-19 shooting while grabbing nine rebounds and dishing out a team-high 6 assists. Brandon Bass chipped in with 12 points in the win as five-Celtics players finished in double-figures.

"They came out hot. They made shots," said Carmelo Anthony. "We didn't make shots, along with the lack of energy that we put out there tonight. For some reason we looked tired out there, we looked fatigued out there and them guys didn't."

Anthony finished with a team-high 21 points on 9-of-23 shooting. Jose Calderon added 17 points and Tim Hardaway Jr. scored 12 for the Knicks who are now 10-39 on the season. 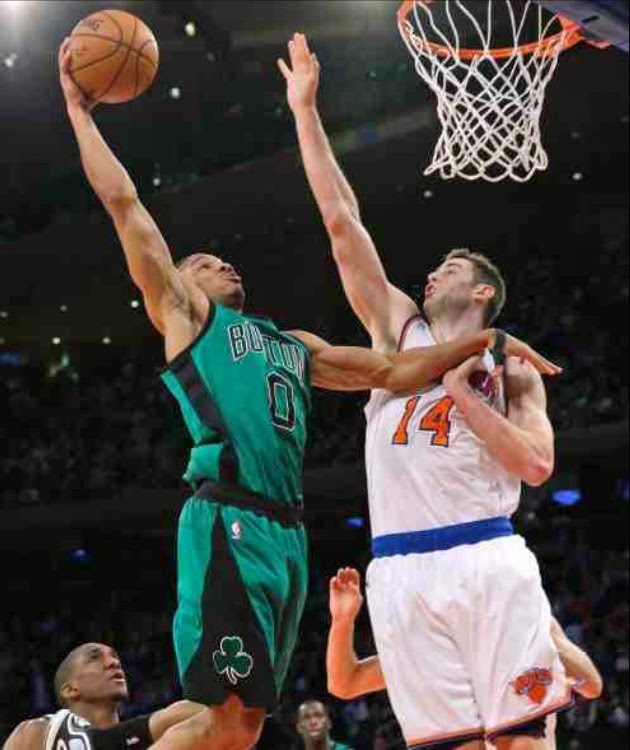 The Celtics began the night hitting their first five shots attempts, including back-to-back 3's by Smart. By halftime the C's led 57-44. The Knicks did outscore Boston 28-23 in third quarter only to be down 80-72 going into the final frame. The closet New York got in the fourth quarter was when they cut the Celtics' deficit 86-82 with just over eight minutes to play.

Consecutive baskets made by Crowder, Smart and Bradley seemed to put the game out of reach for New York and push the Boston lead back to double-digits; 96-84 with 4:30 left. One last chance by the Knicks only further avoided the inevitable, as the Celtics were able to snap their three-game losing streak.

"I thought [the starters] played well on both ends, "Brad Stevens said. "Maybe more encouraging is the way that Jae [Crowder] can give us versatility off the bench."

Boston looked sharp on both ends of the floor as a result of Stevens tweaking the starting-five once again. It's not the first time he has decided to make a change and it turns into a win (i.e Turner, Bass, Zeller and now Smart). Injuries and trades are going to force the coaching staff to go with the best combination lineups to start and finish games.

After only averaging 86.7 points per-game (including a season-low 75 in a Super Bowl Sunday loss to the Heat) in their recent 3-game skid, the C's put up 108 tonight. Granted it was against the Knicks, but they have been holding opponents to 91.4 points in their last seven games.

The C's shot 54.5-percent for the night and 78.3-percent (18-23) from the charity stripe. Tayshaun Prince missed his second straight game with a sore hip. It is unknown if the veteran forward will play on Wednesday