What We've Learned With The Decision 2.0 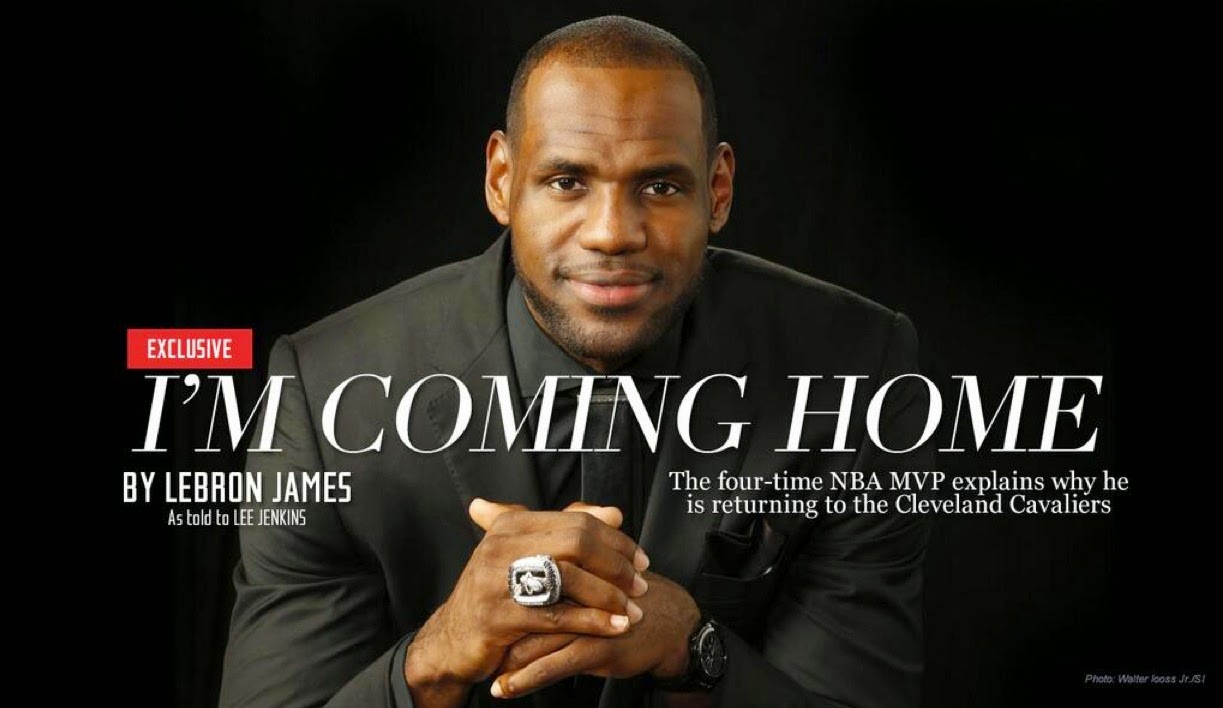 It's been a few days since LeBron James' ground breaking announcement heard around the world. Though we've had some time to let in sink in, some still remain shocked. Four years ago, millions of Cavaliers' fans got their hearts torn apart when one of their own had announced he was taking 'his talents to South Beach.' It seemed nothing could be said or done to re-write that 'wrong' in the eyes of many. Two weeks ago no one believed James would ever consider leaving Miami when he and his two brothers, Dwayne Wade and Chris Bosh had all decided to opt-out of their final two-years of their deals. As Friday afternoon rolled around, it became forever known as one of the biggest days in sports history. LeBron had announced via an essay on Sports Illustrated.com that he would indeed return to where it all started, the city of Cleveland.

This time around, there was no ESPN special disguised as a charity event for the Boys & Girls Club, no lying and telling us that he had 'awoken that morning, and all the answer were so clear,' none of that. No hoopla, not even a single tweet about where his next basketball destination would be. Instead he made his decision, and reached out to those who had showed him love way before anyone knew the kind of polarizing figure he would later become. He spoke to the people of Northeast Ohio, and had a conversation with them. The piece titled 'I'm Coming Home' seemed to me like a letter asking for understanding, and maybe even forgiveness for what transpired the evening of July 8th, 2010. Obviously he still would have left, but we all know James would have chosen a different way of going about it, if he could have done it all again. None the less, he talked about how he now realizes the relationship he has with where he came from is far "bigger than basketball."

"These past four years helped raise me into who I am, says James. "I became a better player and a better man. I learned from a franchise that had been where I wanted to go...Without the experiences I had there [Miami], I wouldn't be able to to do what I'm doing today." [Sports Illustrated.com]

The letter-essay goes on to say how much LeBron missed Cleveland, and went as far as forgiving owner Dan Gilbert for his comments and his letter four years ago. He even thanked the Heat organization as he claims Miami will always be his 'second home'. He explains that he felt like it was time to go back home after his "four-years of college' sort of speak, but you have to wonder what the real reasons are behind the decision 2.0. 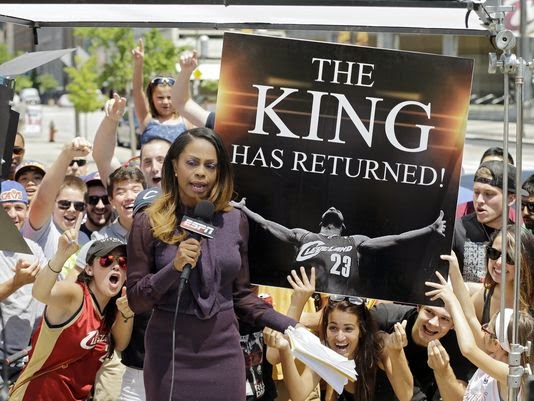 I've always been a firm believer of the fact that in 2012, when Miami went on to beat the Thunder 4-1in the Finals and LeBron captured his first title, he could have accomplish the same thing if he had stayed with the Cavs. Had he been straight with management two-years prior, things could have been a lot different. In 2010 every NBA analysts had Cleveland not only coming out of the East, but beating whoever the West had to offer. They had finally got their all-star big man in Shaq (coming off his best season health wise, in over 10 years) and the final piece was the acquisition of another all-star scoring option in Antwan Jamison. But of course no one saw the mighty Boston Celtics knocking out 'the King.' They said Paul Pierce was 'too slow' to guard Bron Bron, and KG was 'not better than Jamison,' etc, etc. So what happened? On the wake of James becoming a free-agent and knowing that his current team as it was constructed, was not good enough to even make it to the Finals, let alone win it all. So Good-bye Cleveland, as Doc Rivers out-coached Mike Brown and ended an era in six games.

LeBron already had his plans to leave before he took off his number 23 jersey at the TD Garden on that faithful May afternoon in 2010 for the last time. It's no secret, he just had no way of breaking the news to his hometown without some sort of outrage. So here we are four years later, Miami had just gotten trampled on by the San Antonio Spurs (for the second time in LBJ's career), and why are we surprised that he is leaving once again when it's convenient to do so? It's pretty simple folks, LeBron cares about only one thing and it's not the city of Cleveland, it's called caring about me, myself and I.

Think about it, who would want to leave 80-degree weather all-year around to go live in a city that has one of the worst winters in the country? James is a walking marketing machine, and his brand though pretty valuable (estimated net-worth at $270 million), couldn't go through what it went through four years ago and take another hit to his image. Say what you want but everybody wants to be loved, whether you're wealthy or not. When we learned that the Cavaliers could be in the mix to bring back their star for a second go-around, those who choose to forgive LeBron were already were buying their 'Forgiven' t-shirts! And why not? It's not like he could crush the dreams of Ohioans once again right? 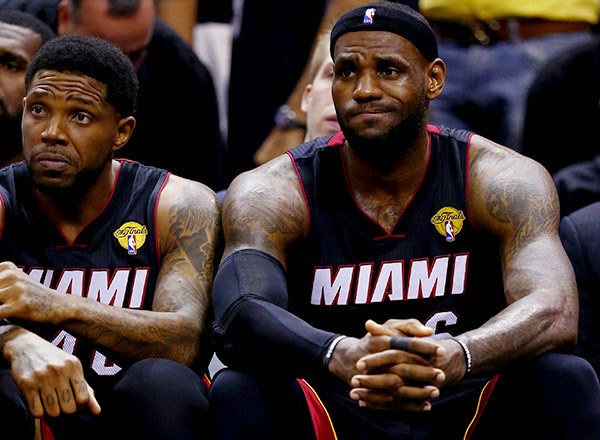 In a Eastern Conference that was as weak as it's ever been this past season, the Heat were never really challenged until they ran into Greg Popovich. Not by the Nets, definitely not by the Pacers, hell the Wizards could have given them a great series. Miami amnestied James' good friend; Mike Miller and traded away Joel Anthony this year to save money and all for what? To bring in a stiff like Greg Oden and a young scorer in Michael Beasly who Spolstra never played when they really could have used him. Dwayne Wade continues to run on borrowed time even after he rested for 30 games this year. Not to mention a big man turned jump shooter and who is afraid of the paint in Chris Bosh (still can't believe he's going to be paid $118 million). Are we still wondering why LeBron cramped up in 90-degree heat at the the AT&T Center in a game one lost last month? Pat Riley literally wanted to ride the 'Big-Three' luxury car until the wheels fell off, but not only did the car gain a flat tire, he lost the engine that made the damn car run to begin with.

If there is one thing all NBA owners know, it's you need to keep your stars happy the best way you can. Regardless of how long they stay, you can't take them for granted, especially with this generation of athletes. As savvy as Riley is, nothing lasts forever, just ask the Lakers, and the Knicks (Pat's former employers). If Dan Gilbert couldn't hold on to LeBron after seven years and one Finals appearance, and countless players that were brought in or shipped out. Honestly, what made the Heat think James would stick around after two titles, four straight trips to the Finals, barely any changes done to the roster plus more added responsibilities to his plate in year five and beyond?

After two championships, four league MVPs and five trips to the Finals (two Finals MVPs) all before his 30th birthday, LeBron knows there is not much left he needs to accomplish. So how cool would it be to go home and bring a championship to the state of Ohio for the first time in over 30 years? That would not only gain more respect from the nay-sayers but add to his legacy that took some beating when he left the first time. It brings more revenue back to the area (season tickets have been sold out at the Q since Friday), and all eyes will be on Cleveland once again as the prodigal son has returned.

So what have we learned? 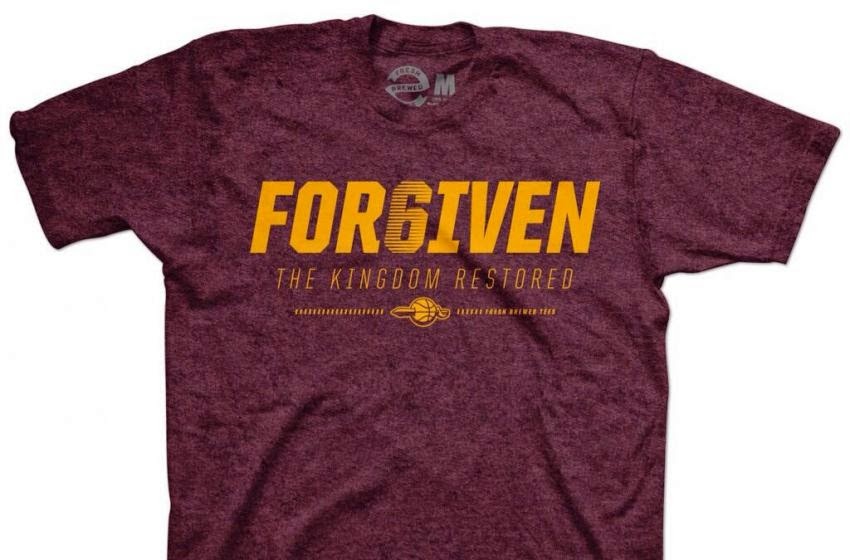 For starters, as compassionate as the essay was (all the LeBron fans ate it up real nice), you have to look at the big picture. Had Miami not looked so tired and run down in the Finals, we would not be having this discussion. If it weren't for the Cavs clearing up cap space like they did in the last few weeks, there would be no possible way of signing James. I like to think the Celtics and Danny Ainge had plenty to do with that, as their $10.3 million trade exception made it possible for the three-team deal with Brooklyn to go through just 48 hours prior to James' announcement. You got to love the irony, since Boston was the last team he played against before he ran to South Beach four years ago.

As 'appealing' as the Heat bringing in Josh McRoberts and Danny Granger might have been and even bringing in a much better point guard than Mario Chalmers. Riley traded for the draft rights of Shabazz Napier (who has since blocked LBJ and deleted all related tweets since Friday), a LeBron request, but it still was not convincing enough when it comes to trying to beat a team like the Spurs. This time around James finally will not have to constantly bring the ball up, because he will have a legit point guard for the first time in his career in Kyrie Irving. He can relax and focus on scoring and still have the energy to play defense, it's a no brainer why Cleveland is the better choice for him at this stage of his career. He's approaching the doorstep of decade number three of his life, it's time to play smarter not harder.

But let's not fool ourselves, this was his plan all along, right? We can't ignore the fact LeBron is only signing a two-year/$42.1 million deal with a player option for 2015-16. As important as his public image is, and trust me, the stock has risen considerably since Friday. Dan Gilbert and friends better make moves and fast if they want to keep their "King" happy and on his throne. There won't be another seven years of  'let's wait and see' projects. Of course the signing of Mike Miller was a good start, but a trade for a Kevin Love type player would defiantly keep James and his smile a lot more permanent in Cleveland. In any event I guess we just have to sit back with our popcorn in hand and enjoy the show for the next 12 months.

"In Northeast Ohio, nothing is given, says LeBron. "Everything is earned. You work for what you have." [Sports Illustrated.com]

Let's just hope the 'earned' trust of his forgiving hometown fans is more than enough to keep LeBron around for years to come. Lord knows I couldn't take a 'The Decision III: King & K.D. in DC'

Posted by SeanDutra at 7:45 AM