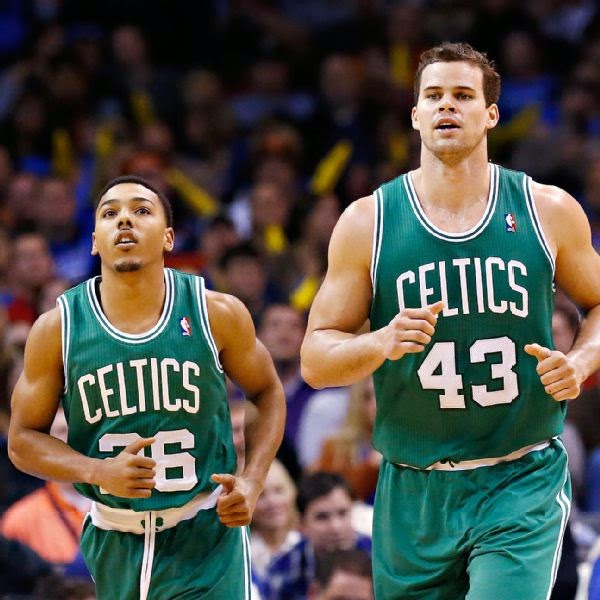 Kris Humphries said earlier this week that he was very much interested in returning to Boston. The feeling was mutual for Celtics, but it was highly based on Danny Ainge bringing in an impact player this offseason. That most likely would have meant parting ways with Jared Sullinger and or Kelly Olynyk if such a deal were to be made, thus being able to re-sign the power forward. But after just one season in green and exceeding well beyond expectations, Kris Humphries is on the move again. This time to the nation's capital.

In a deal first reported by Yahoo Sports' Adrian Wojnarowski; The Wizards are set to acquire Humphries via a sign-and-trade with the Celtics. Washington wanted to sign the forward, but that would have put them over the cap. After using their mid-level exception to sign Paul Pierce over the weekend at roughly $5.5 million per year, a trade with Boston was the only way to pay Humphries his reported $4.3 million a year. The deal is estimated to be worth $13 million for three-years.

In return the Celtics will receive a trade exception (worth $4.3 million) which was part of an  $8.6 million trade exception the Wizards received after sending Trevor Ariza to Houston a few days ago, also through a sign-and-trade. The exception is good up to a year from when the trade becomes official in the upcoming days. Plus Washington will send a future conditional second round pick to Boston as well (more trade assets).

Humphries was acquired as part of last summer's blockbuster deal between Brooklyn and Boston, that sent 15-year veteran Pierce and Kevin Garnett to the Nets. In 69 games for the Celtics this season, Hump averaged 8.4 points, 6 rebounds, in about 20 minutes a game. After being buried on Brad Stevens' bench at start of the year, we never once heard as much as a single complaint from the ultimate professional, who just so happened to be the team's high paid player at $12 million. After rumors of moving the big man because of his expiring contract for most of the season up until the trading deadline, Ainge never pulled the trigger on any such deal. When Rondo returned in late January, Humphries seemed to flourish in the offense as he often found himself on the receiving end of one of the captain's patented passes.

At 6'9 Humphries could run the floor, shoot and rebound and at times played as an under sized center, but he was probably the Celtics' most consistent power forward last season in my opinion. When asked to start or play quality minutes, you could see he was a hard worker whether he played five or 30 minutes, he was that solid player that most fans didn't expect to see considering the season he had in Brooklyn prior to his arrival in Boston. He will now joins the Wizards, who are quietly building to contend in the East. We wish him and Pierce good luck next season.


At the stroke of midnight last night, second year guard Phil Pressey and his $813,482 contract became fully guaranteed. This makes him the 14th player on the Celtics' roster under guaranteed contract for the upcoming season. The 5'11 backup point guard who played behind Rajon Rondo averaged 2.8 points and 3.2 assists a game last year. This season he looks to stay confidant as he will have to fight for minutes now that Marcus Smart is in the fold. Ainge now has to make a decision on summer league standouts; Chris Johnson, Chris Babb, Colton Iverson and Mike Posser as there is only one roster spot remaining.

The Celtics announced last night that veteran and restricted free agent; Avery Bradley has officially signed his new contract. The deal is estimated to be about $32 million for four-years, as reported last week. Bradley is coming off his best season as a pro averaging 14.9 points, and 4 rebounds in 60 games. The 6'2 guard should be ready and healthy for the start of training camp, and Ainge couldn't be happier.

"We see Avery as part of our chase for banner 18," said the Celtics President of Basketball Operations. "He's still getting better and is still far from reaching his ceiling. We're ecstatic to have him back." [Celtics.com]