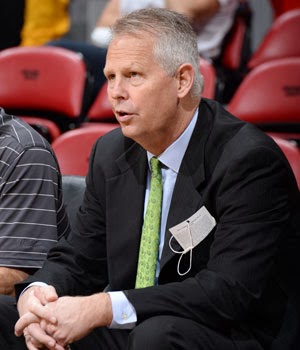 Danny Ainge has the Celtics right where they need to be.

No deal was made at last Thursday's trading deadline because there wasn't a trade worth making and the Celtics' losing streak is only making things even better for Ainge.

Celtics are currently in the position for a top five draft pick. The five game losing streak was topped off by three straight losses to the three worse teams in the Western Conference (Lakers, Kings, Jazz) and the schedule doesn't get easier for the Celtics.

After their home game versus the Hawks, Celtics will host Indiana, Golden State and Brooklyn. They also play Miami, Chicago and Toronto in March, six teams throughout the month that will most likely beat Boston. Next month, Celtics play Chicago, Toronto and Brooklyn two times each.

Celtics should not be playing its entire roster. Within the next two weeks, Jared Sullinger should be shut down for the season. He's been banged up all season and he's one of if not the best asset the Celtics have. Sullinger dealt with back issues prior to the season, he hurt his right hand last month and recently suffered a concussion in Los Angeles. The last thing the Celtics need is Sullinger to injure another bone in his body in a meaningless end of the season game.

Avery Bradley is another asset the Celtics need to protect. It is a contract year for Bradley so his stock may take a hit but that's not necessarily a bad thing. It would be great to see Bradley stay in Boston. His injuries throughout the season may lead to a bargain-type contract that keeps him around. He'll definitely come back at some point of the season but there's no need to rush him. This is how you tank.

One player who the Celtics don't need to shut down is their best player; Rajon Rondo. Give Rondo more game time experience. Let Rondo take all the shots he wants, make the passes he wants and set up the last play of the game for him. This is a great way to get him experience in clutch situations and the best part about it is winning doesn't necessary matter at this point of the season.

It would have been a huge mistake if Danny decided to move veterans just so his team could lose more games. Celtics now get to keep those veterans (Green, Humphries, Wallace) and can potentially grab a top five pick in next year's draft. Teams will get hungry for draft picks on draft night, we've seen it before. In 2007, Oklahoma City (then Seattle) traded its all-star in Ray Allen for a pick, Delonte West and Wally Sczerbiak. That was a steal. Who knows what Ainge will do with that pick, who knows what he'll pull off. This summer's draft may be the best NBA draft that the league has seen in the past five years.

Ainge also has the trading chips on this team along with draft picks to entice potential trading partners.

If Celtics stay in the top five for the draft, they have a handful of assets and draft picks that puts them in the best situation a Celtics fan could ask for. The future all of a sudden looks a bit brighter.