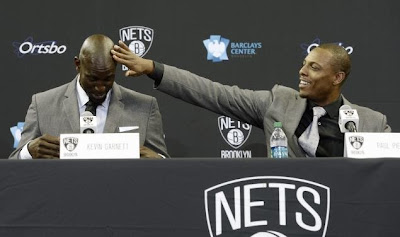 After Doc Rivers' departure, Paul Pierce saw the writings on the wall, and when the trade was presented to him, he made sure he wasn't going alone so that he could give the Brooklyn Nets its best chance to compete for a title next season.

The Brooklyn Nets introduced Pierce, Kevin Garnett and Jason Terry to their new city in yesterday afternoon's press conference at the Barclay Center.


Pierce sat with a dazed look and talked about how he wish he could have ended his career wearing green and white but is "excited" for the challenge he'll face next season.


"You know, it's tough when you've been in a situation for 15 years and then you come to an organization like the Brooklyn Nets, but when you look at what they're trying to do here, win a championship, bringing in the pieces necessary, it really is exciting," Pierce said. "I would have loved to end my career in Boston, but that day and age is probably over with players ending their careers in one city. When the trade happened, you felt excited, especially with Kevin and Jason coming along. It makes the situation a little more comfortable. The ultimate drive is winning a championship." 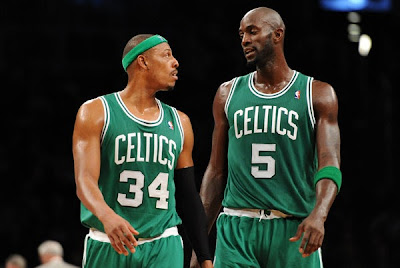 Garnett admitted that retirement was "absolutely" an option for him because he didn't know where the Celtics were at with their decision about what they were going to do with Pierce. But when Pierce called Garnett, the two chatted for close to two hours, as Pierce "warmed him up to it" told Garnett he shouldn't retire because he has "plenty left in the tank" and ultimately convinced Garnett to waive his no-trade clause so that the two could be traded together.


"It's unfortunate we had to obviously move on from Boston," Garnett said. "But I felt like both sides are going in different directions. For me, one of the major reasons I decided to come here was because the bones of this - I feel like adding what you see up here with the bones of what they have already, with Brook [Lopez] and Deron [Williams] and all the pieces they have here, Joe [Johnson] - I feel like Paul said, this gives us the best option to win again, to win it all. I'm embracing this opportunity, my family's embracing this opportunity. I'm looking forward to it."

It was the first time Pierce and Garnett had talked about the trade. He admitted that he smelled a rebuilding season in Boston coming after seeing Rivers go to the Clippers and thought that going to Brooklyn was his best option to compete for a title.


"Like I said over the past couple of years; it would be tough to go back to an environment that wasn't trying to win a championship," Pierce said. "When you get that taste of success you don't want to go backwards. That's how I felt. I think Doc [Rivers] felt the same way. Kevin [Garnett] felt the same way. That's why we all put ourselves in these situations where we could try and win."

Even though the trade was completed three weeks ago, Pierce admitted that it hasn't really hit him yet but that he is looking forward to creating a new chapter in Brooklyn.


"It hasn't really sunk in, but I think it's starting to sink in as we speak," Pierce said. "I saw my jersey up in the locker room and I said 'OK, there's a trade.' But for me to actually be here now looking for a place to live, being in this arena, get to know my way around the city, it's really starting to sink in. It's become real. I'm no longer a Boston Celtic. I'm a Brooklyn Net. That's what it is right now and I'm here to create some kind of legacy here in Brooklyn."

As much as Pierce tried to hide it, he couldn't. His heart is still, and will always be in Boston. Don't think that he will not work hard in Brooklyn, because he will, he's a competitor (as we all in Boston know) but it's going to take him a while to get over this.


"[It's like] The first girl you was in love with," Pierce said. "And ya'll broke up, you cried, thought about her, probably sent letters; she rejected them. You cried some more and then you moved on."