A Look Back at Rajon Rondo as a Celtic

In the first game of 2015, Rajon Rondo shined as only he could at the TD Garden on Friday night. In his return to Boston against his former team after being traded to the Dallas Mavericks just two weeks ago could be summed up in one word: Tiresome

"It was a special day today," said Rondo. "I'm emotionally tired, physically tired. I'm drained right now. It was a tough game to get through. I don't think I've ever been this tired after a game before, where it's even hard to talk to you guys right now. I'm tired."

Playing in front of Celtics nation while wearing blue and white and Dallas across the point guard's chest for the first and only time at Boston this season, he scored a game-high 29 points on 5-7 from behind the arc, while grabbing six rebounds and handing out five assists. Last night closed yet the last chapter of the 'New Big-Three' era and the only link that was left to the 2008 championship team that raised banner 17 up to the rafters.

"I was very grateful to play for a sports organization like the Boston Celtics," Rondo said. "It starts with Danny and [co-owner] Wyc [Grousbeck] believing in me from Day 1 -- [they] traded for me. And then, obviously, the way the fans embraced me since I've been here since Day 1, it's a very humbling experience. I'm glad I got to experience this in my life." [ESPN Boston]

We here on Causeway Street not only were at the Celtics game on Friday, but we started reminiscing about the all-star point guard's best games in green. Of course there's too many to go through in his eight plus years in Boston, but the former captain has a few gems that stand out. So without further adieu, we bring you some of Rondo classic performances in a Celtics uniform: 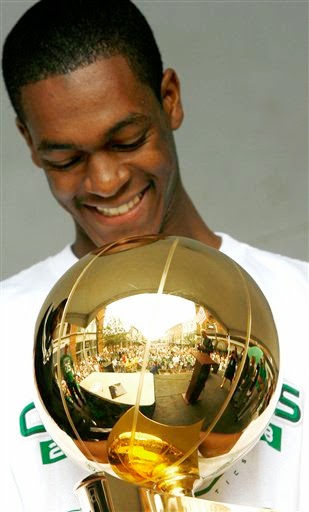 On a day where the C's were endangered of being down 3-2 and going back to Cleveland for game six against the reigning Eastern Conference champions, Boston shot 51.3-percent from the field while Paul Pierce led the way with 29 points. But it was Rajon Rondo who had best game of his first postseason appearance. The second-year guard finished with 20 points (shooting 9-of-15, including going 2-of-3 from 3), dished out 13 assists in a Celtics victory, that eventually led to demise of the 'King' two games later.

Of course Paul Pierce was awarded the Finals MVP, but Rondo might of have been the series-clincher's most valuable player. In only his second 20-point game of the 2008 playoffs, the point guard filled the stat sheet in route to the largest defeat in an NBA Finals deciding game. His 21 points (5-of-7 from the free-throw line) 8 assists (one turnover), 7 rebounds and 6 steals was a sign of good things to come for the then 22-year-old.

The Celtics entered the 2009 postseason as the second seed without KG and a game one overtime loss to Derrick Rose and the Bulls at home, where Rondo registered 29 points (12-21 from the field), grabbed 9 rebounds and dished out 7 assists. In game two, Rondo decided to follow that performance with 19 points, 16 assists, 12 rebounds and 5 steals, while recording his first of many triple-doubles of the postseason to tie the series at one-game apiece.

Three nights after Rondo's first triple-double, the C's shot 56-percent from the floor in the only one-sided game of the seven played between these two teams. Rondo continued to shoot lights out going 8-for-15 while recording 20 points, 11 rebounds, 6 assists and 5 steals where the Celtics were a plus-26 in the lopsided victory. After seven OT's and Rondo averaging 19.4 points, 11.6 assists and 8.5 rebounds for the series, Boston had beaten a young and hungry Bulls team that pushed them to the brink of elimination.

In what should have been a meaningless end of the regular season (rest starters) type-of-game, was actually a foreshadowing of what was to come a month later between LeBron and the Celtics. On an afternoon when Paul Pierce and Kevin Garnett were both not shooting well (combined 9-for-27), it was Rondo who saved the day with 16 points on 7-of-14 shooting, and his 14 assists (most to former clutch shot-maker Jesus Shuttlesworth; who finished with 33) while only committing one turnover, led Doc Rivers and Mike Brown to believe the two teams would eventually meet again in the playoffs. Cleveland at 60-17 had the first seed all but wrapped up weeks ago, and Boston at 48-28 were comfortable as a fourth seed, poised to make a deep run back to the Finals.

The Cavs led the series 2-1, while Boston was looking to tie the series at the Garden to not go down 3-1 going back to Cleveland. It was the point of no return for Boston as Rondo arguably had the best game of his career at the time, finishing with a game high 29 points (11-of-16 from the free-throw line) 18 rebounds (4 offensive) and 13 assists sending the series back to the Q tied 2-2. It was far from over for the underdog Celtics who would later 'shock the world.' 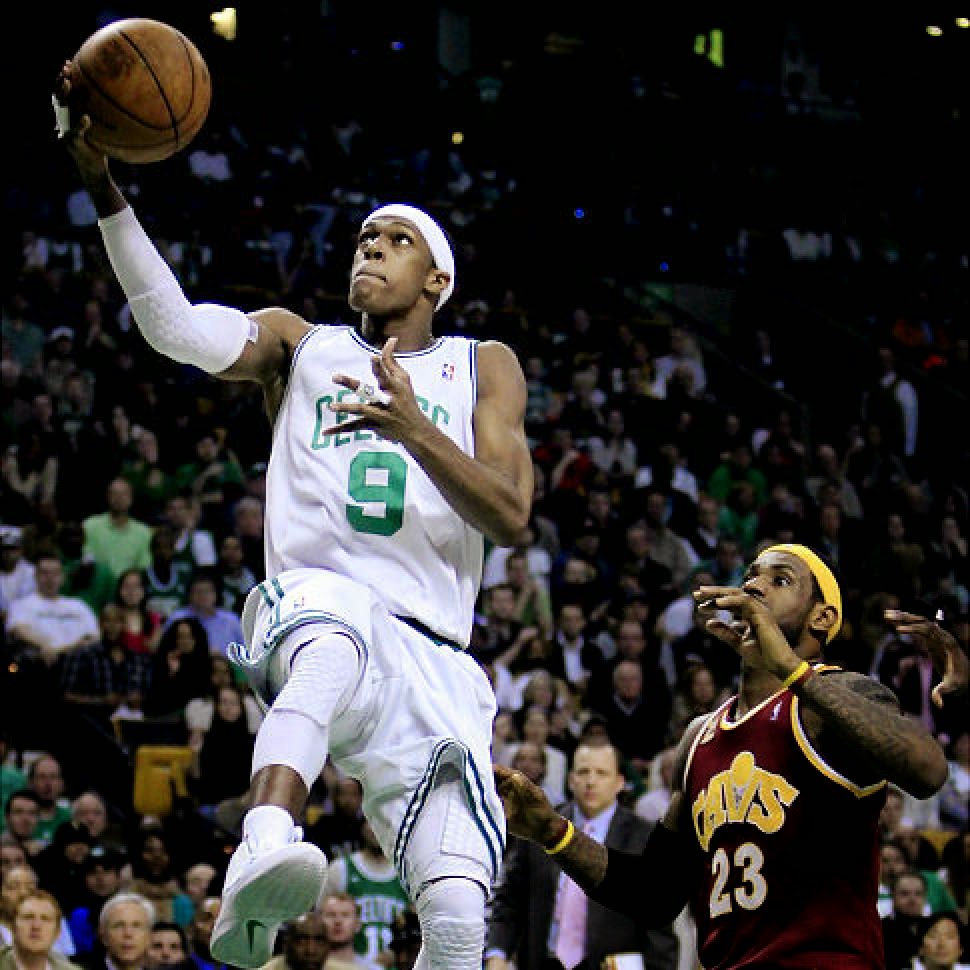 The Celtics had won three games in a row, preventing the favorite Cavs to win another game in over seven days. Despite Bron-Bron ending his first stint in Cleveland with a triple-double and pulling his jersey over his head in the Garden tunnel what would have been for the last time, it was Rondo who had the last laugh. The point guard continued to outshine 'King James' going 9-of-15 from the field for 21 points, handing out 12 assists and 5 steals in a home C's victory on their way to Eastern Conference Finals for the second time in three seasons.

Rondo's triple-double consisted of 19 points, 12 rebounds and 10 assists on the night, where he found a streaking Walter Ray (8-of-11 from 3) who went off for 32 points while breaking the NBA Finals record for the most 3-balls made in a game (which has since been broken). Rondo tied the series at 1-1 going back to the Garden.

It was the first time in the 'New Big-3' era that the C's were down 2-0 in a playoff series. With the Celtics' postseason on the line at the Garden, Rondo had dislocated his left elbow in an ugly play where his arm was actually facing in the opposite direction. After poking the ball away from Dwayne Wade and crashing to the floor, he pulled Rondo along with him causing the injury in a gruesome image. When all hope seemed lost, the point guard was seen returning to floor just four minutes later from the locker room, with his injured arm heavily padded and heart full of adrenaline, Rondo finished the game with what can only be described as the most valiant thing ever seen in sports. He picked apart the Heat defense, handing out 11 assists in the process and even dunking after stealing the ball with his left hand to seal the win for the Celtics. Miami would go on to win the series, but no one could ever forget that Sunday afternoon act of resiliency.

New York came into the Garden winners of 10 straight and the new found fame of former Harvard University star Jeremy Lin star turned pro, was at an all-time high. The guard went un-drafted and was cut by the Warriors before landing in Mike D'Antoni's starting lineup. During this Sunday matinee on a national stage, it was dubbed Lin vs Rondo, it was the Celtics' son that proved whose house it truly was. On an afternoon where the 'new-star' was 6-of-16 from the field with only 5 assists to go along with 6 turnovers, it was 'The Truth' Paul Pierce, who sent the game into overtime with a clutch 3-ball. In the end Rondo became one of only three players in NBA history to finish with a least 18 points, 20 assists and 17 rebounds in a C's victory over the Knicks in the official end of 'Lin-Sanity.' Since then, Lin has played for three teams in less than two years. 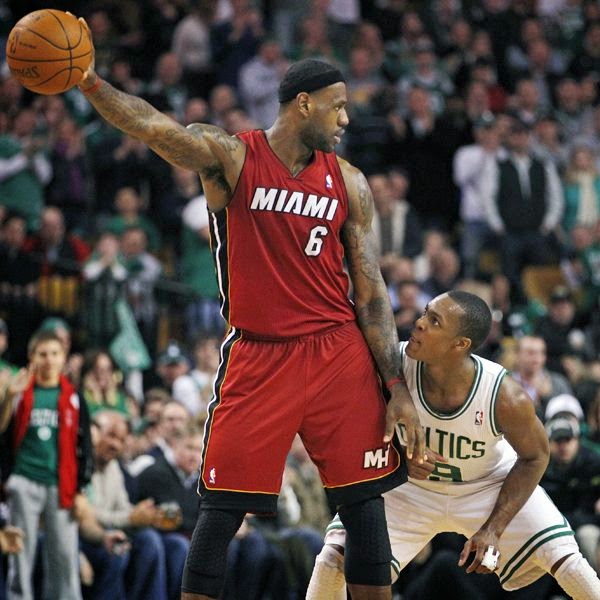 The Celtics were taking advantage of the lock-out shorten season and every time Rondo met LeBron, it had potential to be an instant classic. On another Sunday afternoon with playoff intentions between the rivals, Boston made a statement in the midst of their post all-star break surge up the Eastern Conference. All five starters finished in double-figures, with the man of the match being Rajon Rondo, when he recorded his one of league leading six triple-doubles that year with 16 points, 14 assists and 11 rebounds on yet another nationally televised game.

The Celtics were looking to steal one in Miami to go back to Boston 1-1. Paul Pierce had fouled-out early in the fourth quarter, and Rondo became a one-man show picking up the slack to force overtime. The point guard seemed like a man possessed scoring in every way possible, making mid range jumpers, layups, and even from deep (2-of-2 3-pointers), while getting to the free-throw line 12 times and making 10 freebies. Unfortunately for some calls that could of gone either way down the stretch, ruined what most say was Rondo's best game ever. The all-star finished with 44 points on 16-24 shooting, 10 assists and eight rebounds in a losing effort. Despite the lost, the C's would take the next three games to go up 3-2, but too much LeBron in game six and even Rondo's triple-double ( 22 points, 14 assists and 10 rebounds) in game seven were not enough to make it to the NBA Finals for a third time in five years. Rondo's average of 20.8 PPG, 11.2 APG and 7RPG for the series had out-shined Bron-Bron once again.

With a record that stood for over 20 seasons, Rajon Rondo tied hall-of-famer point guard John Stockton for the second longest double-figures assists streak in NBA history with 37 straight games. The all-star finished with 15 points, 16 assists and 9 rebounds against Orlando. The feat showed that Rondo was arguably the best 'pure point-guard' in the league, averaging over 11 assists per game for back-to-back seasons and winning the league's assist title two years in-a-row. Stockton was the last player to achieve that average in 1993-94 season.

With so many records including triple-doubles, and assists, Rondo is and will always be the most unique point guard to ever play the game. His ability to affect the outcome of a basketball game without scoring is something that can never be overlooked especially when it comes to the playoffs, and competing for a championship. For eight seasons, he gave Celtics fans something special and whether you want to admit it or not, could you really picture another guard doing what he did all those years?

The answer is: NO.

He might have frustrated you at times off the court, but it was worth the price of admission when you all got to witness his greatness. At the end of the day, you really had to let just him be great, and maybe now he'll be appreciated for all the good he did. I mean isn't that how it always is, once something that was yours is gone, isn't that when and only when you truly miss it?