It's been an exciting month of NBA Playoff basketball to say the least. With the Eastern and Western Conference Finals set to kickoff tonight, we here on Causeway Street are taking a look back at some key points that we've learned over the last four weeks of postseason play

For all Celtics fans this is not a new developing story, but for the rest of the world 'The Truth' is still as dangerous in the postseason as he's always been. Pierce remains one of if not the most underrated scorer in NBA history. The 17-year vet lives for being in clutch moments, such was the case in Game 3 (game winning 3), 5 (go-ahead 3) and 6 (game tying 3 to send to OT, but waived off) of the semifinals against the Hawks. The Wizards had the East's number one seed on the ropes because of Pierce's shooting (49-percent from the field, 52.4 percent from downtown). In 10 (6-4) playoff games the forward went from averaging 11.9 points in the regular season to 15 while owning the Raptors for the second straight year. Pierce made headlines throughout the first two rounds, and he enjoyed every minute of it. 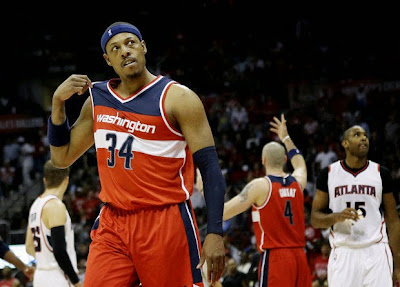 Of course we all remember how Game 6 in Washington ended, a fadeaway corner 3 as time expired, only to be wiped gone because the replay showed the ball was still in Pierce's hands 0.1 second too late. Either way, it was a hell of a ride for Wizards' fans this postseason. The only question remains, will Pierce be back for unfinished business or does he call it a career? Only time will tell.

"I don't even know if I am going to play basketball anymore," said Pierce after the Wizards Game 6 loss. "These seasons get harder and harder every year, every day. Summers get even harder when you start getting back in shape. I'm 37-years old." [ESPN]

The Los Angeles Clippers are frauds:

After finally getting rid of the likes of Sterling, the Clippers should have come into the season refreshed and ready to take over the West. Instead they struggled for most of the regular season, only to somewhat get it together in April to grab the third seed on a technicality (Spurs loss on the last day of the regular season, which gave them the sixth seed). With that being said, after an epic first round with the champs, and eliminating them, it should have been smooth sailing to the WCF. Instead L.A. decided to make it interesting by going up 3-1 against the Rockets, only to lose in seven games, thus the curse of CP3 not being able to get past the second round lives on.

So what happens next?

Besides Chris Paul and Blake Griffin, G.M. Doc might and should consider blowing the Clippers up. Obviously out west, seeding is everything especially when it comes to playing a game 7 on the road or at home. Maybe Rivers should have considered bringing in Paul Pierce instead of Spencer Hawes, then again who would have started at power forward when Griffin was out for nearly two months? Big Baby? Those are the types of decisions that former Celtics head coach has had to face, and so far after two seasons he should consider the latter in a forever competitive conference. Did we mention DeAndre Jordan will be a free-agent this summer? 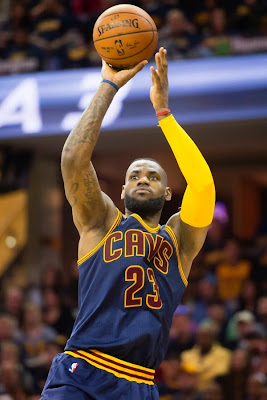 LeBron James is still the best in the league:

Steph Curry might be the MVP (for the record I would have gone with James Harden), but LeBron is the best player in basketball (or the planet if you agree with Sir Charles). He single-handedly beat the Celtics and the Bulls in the first two rounds with an injured Kyrie Irving, no Kevin Love and J.R. Smith (suspended for 2-games in round two). Not to mention he drew up a play for himself and hit a buzzer beating 3-ball in Game 4 to not only take back the series against Chicago but he reminded us all that at age 30, there are no signs of slowing down.

Bron-Bron is going to play in his fifth consecutive conference finals (seventh overall), that's impressive since he only has two more to go to reach Mr. Fourth Quarter himself; Chauncey Billups with seven consecutive trips (03'-09'). Interesting enough this will only be Cleveland's third trip to the ECF in franchise history, first since 2009. Can LBJ take on a deep team like Atlanta by himself? Though the Hawks are somewhat reminiscent of the Spurs in that anyone can step up in any given time, I hate to admit it but the answer is YES, he can. Do we remember the 2007 ECF between LeBron and the mighty Detroit Pistons by any chance?

For the first time since 1998, the NBA Finals this year will not feature the likes of Tim Duncan (6), Kobe Bryant (7) or Dwayne Wade (6). The Golden State Warriors, the favorites to win it all, have not raised a banner since 1975, which also was their last trip to the Conference Finals. Houston on the other hand, the surprise team of the postseason, have not made it this far since 1997, when John Stockton spoiled the dream for Charles Barkley of making another Finals appearance with one game winning 3-pointer. Kevin McHale became the first in NBA history to come back and win a series after being down 3-1 as player (1981 ECF between the Celtics and Sixers) and now as coach this year against the Clippers. Will the Rockets strike lightning in a bottle and knock off the league's best team? The way these playoffs have gone in H-Town, you never know.

In the East you got the Atlanta Hawks making their first trip to the ECF in their franchise history. The best team in the conference all year look to continue to break records and extend their best season ever with a trip to the big dance and play for the Larry O'Brien trophy next month. Only LeBron stands in their way and it's a tall task, but they have the personnel to pull it off. Cleveland looks to make their first NBA Finals appearance since 2007. The whole reason Bron Bron went back home (besides saving his image of course) was to bring the city and the state of Ohio for that matter, a major sports team championship, the first since 1964. Could this be the year? It's going to be interesting the next few weeks.