Avery Bradley: NBA Finals is a 'Realistic' goal for Celtics 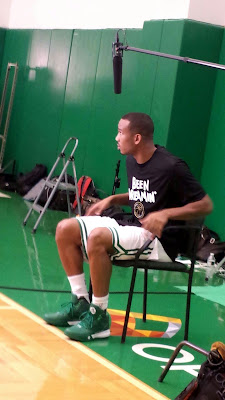 As the team's longest-tenured player, Celtics guard Avery Bradley has set the bar for the 2015-16 Celtics higher than anyone else anticipated.

During the team's annual media day, Bradley told reporters that the goal for this Celtics team is to make it to the NBA Finals.


"Hopefully [we can] use all the experience we gained from last year to get further and have a chance to play in the championship," said Bradley. "Obviously, that's our ultimate goal, and we're going to try to prepare so that we can get to that level."


As the lone player left from the 2011-12 Celtics team, Bradley's optimism is coming from a guy with playoff experience under his belt. The only other player on the roster with more experience than Bradley is David Lee; who just won a championship with the Golden State Warriors three months ago.

But can the Celtics really make it that far?

The Celtics finished just under .500 last season (40-42), with a record that was good enough for a seventh seed in the east. Although the roster has improved, making it to the Finals without superstar talent would be a big surprise.

Bradley, who was one win away from making his first NBA Finals appearance back in 2012, believes that hard work and players buying in to coach Brad Stevens' system can bring his team to the championship round.


"I definitely feel like it's realistic," said Bradley. "A lot of people laughed at me when I said we were going to make the playoffs last year, and we did. If we continue to work hard anything is possible if you buy in to what coach is trying to do and to the Celtics culture."

Avery also talked about being a leader for the younger guys on the team, and holding his teammates accountable. He's also worked on his scoring over the summer. Bradley is looking to take a step back from his comfortable mid-range jump shot and start making threes, and driving to the hoop more often.


"Long twos don't make as much sense as a three-pointer and that's something that I've worked on in the summer, spent a lot of time on that," said Bradley. "But I've also spent time on getting to the basket, and trying to get to the free throw line - that's something I'm focusing on this year. I know I can help my team out a lot, and I definitely think I've improved."

Bradley shot 35.2 percent from three, and 42.8 percent from inside the three-point arch last season; where he scored the majority of his points. Maybe this is the season Bradley will become a three-point threat. If the Celtics want to make it to the finals, they're going to need all the extra help they can get.


Here's a video of Bradley's press conference at media day: